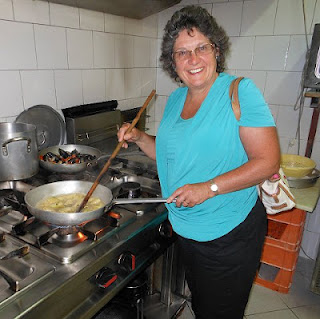 As I love cooking it was a thrill for me to get a cooking lesson included in the Italian language course I attended recently in Italy. On the island of Elba to be precise! What an adventure I had from start to finish.

Having arrived at the school in Porto Azzurro on the east of the island and been shown my apartment, I went shopping and bought loads of wonderful fresh groceries as I was self-catering. Put the shopping in the boot, shut the boot, and found out that I had locked the keys in the car. What a start to my independent living experience. It was late Saturday evening, so no mechanics to be had. However I found two angels in the supermarket - who phoned their mechanic friend - who broke into the hired car... and I paid him 100 euro for the privilege.

My feelings were... thank god there was no frozen food in the car as I had a two-hour wait before the mechanic arrived. Well, it was Saturday and there was a festa happening in the town. It is only the first day and already I am in Italian mode.

We started the course on the Monday morning with a written exam, followed by an oral one. Met the teachers and was introduced to my fellow students who I would be sharing the next two weeks with. Both German, so the only English I spoke was to myself and to my husband Andy in two brief phone calls. Talk about immersing yourself in the language ... it was braw or should I say "era bravissima!". The teachers were wonderful. They imparted their knowledge graciously and helped us through the exciting grammar and delightful phonetics of the Italian language! Grazie mille Debora and Christina...

There were tons of adventures throughout the time in Elba. Driving round the island was an adventure! I find my driving is always an adventure in Italy. Long walks up mountain sides were adventures! The island was so beautiful, with many sandy beaches; sheer cliff faces; winding, windy roads. I am sure you get the picture. I loved it so much I intend to return next year.

I left the island a day earlier than intended as the wind picked up and swirled around the island causing disruption of the ferries, and I enjoyed an exciting ferry trip to the mainland as the waves tossed the massive ferry as if it was a light canoe. Arriving late on Friday evening in Pisa I found that there was no room to be had anywhere until a kindly receptionist took pity on me and phoned around until he got me a room on the other side of town. A very posh hotel with a very posh price, but there was a bed and a very welcome shower. The receptionist as luck would have it, has a villa on Elba and was very interested in my time at school. Small world...

I returned home to find that my garden room project had gone on hold while I was away. The workmen had obviously heard about Italian time and I was so relaxed after my time away that I didn't even feel vexed. Go figure!

There were loads of other blips and slips and I will continue with the saga in more depth next week and combine them with some beautiful photos of the beautiful island of Elba.
Ciao for now!
Eileen
Posted by Eileen Auld at 08:29