Italian travels with my son


It was a wonderful week... if a trifle chilly. The weather that is, not the mother/son relationship. Tuscany in February is still sunny however the sky is deceiving as furry coats would have been the best option. If I had one that is... We arrived in Rome late Saturday evening and set off for the southern Tuscan coastline early Sunday morning with me delighted to be driving my Fiat Punto courtesy of Hertz!  I do love driving, especially in Italy. In fact everyone says that I drive like an Italian. I know that I certainly park like one! you know when straight lines are really only a guideline!

Gordon, our younger son, and myself were on a fact finding tour of the Maremma area. In fact, we were searching for a suitable villa to host the spring Yoga week and find it we did.

We were staying in a beautiful area called Gianella on a promontory that joined the area of Monte Argentario with the mainland. Our hotel was wonderful and the staff always eager to help... especially with our Italian. We were adjacent to the town of Orbetello which is situated on another causeway in the middle of what is a protected bird sanctuary and lagoon. See photo below. This is a truly wonderful part of Tuscany and doesn't usually feature high on the tourists' agenda but is high on mine. 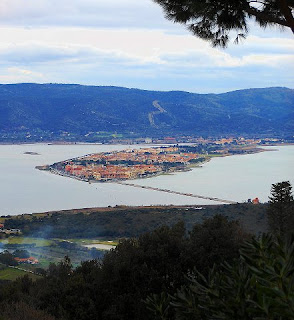 I love the unbelievable trust of this town nestling at the foot of some amazing hills, not to mention the Monte Argentario itself. Monte Argentario is a very large remnant of  volcanic activity... a huge rock that is an island with the most amazing views of the Tyrrenian Sea. In fact I am quite high up on the rock when I took this photo! and yes of course the road was "curve" - the Italian for bendy and also very steep and single track! What can I say - I love to view life from the top and it would appear being at the top of this particular rock is a regular occurrence. 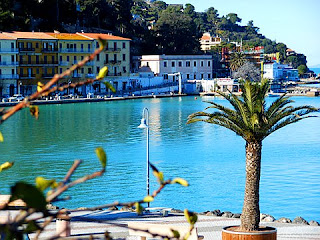 As well as touring the countryside, we spent a lot of time on the island of Monte Argentario itself, in a town called Porto Santo Stephano We visited many of the local towns, however Porto Santo Stephano is one of our favourites for although the weather was chilly the locals were not. The sky and the sea were blue, the food was absolutely magnificent as the fish were arriving one day and on our plates the next.

The photograph shows the blue sky and blue sea and perhaps conveys some of the tranquility and pleasure we felt while walking along the prom... 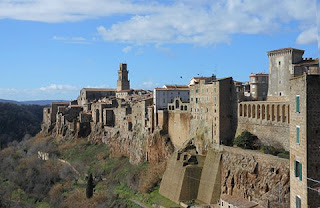 Another favourite of mine is Pitigliano, seen here, where the Etruscans came and carved their city into the rock itself. Well worth the two hour drive around many, many steep curves! That is two hours up and another two hours down! Now that is the time it took me while driving the car... imagine the time it took them when they landed on the coast all those years ago. Probably at Monte Argentario...

As I said, we found our perfect villa with its touch of luxury! It is situated in Punta Ala, with a panoramic view of the Tyrrenian Sea and the island of Elba. I am so looking forward to taking my students to visit this beautiful place and perhaps we can even include Pitigliano in our schedule. Our Living It Yoga weeks include sightseeing trips, market visits, spa days, Italian cooking - mine! as well as what you would expect ; asanas and meditation. 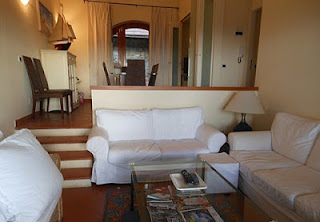 Gordon and I spent a whole week enjoying amazing food, wonderful wine, good company and inspirational scenery... he did complain that "radio Eileen" was a constant feature so if there is anyone out there looking for a radio host or hostess... I am available!