Well I got it right in October when I wrote that although I was settling for a quiet life for a couple of months, adventures would soon be on the horizon and an adventure on Sicily at New Year was almost a given...

Our adventures started on Sunday the 15th December, when we found out that we had been broken into on Friday the 13th. We were on our way to Aviemore, having spent a couple of lovely days in Perthshire celebrating our 39th anniversary, when we got a call telling us that we had uninvited visitors on the Friday night. They had stolen ipad, TV, cameras, money, food from the fridge and freezer and in fact nearly 3 weeks later we are still discovering other things that they took. The biggie was the fact that they stole my husband, Andy's car!

Not so much an adventure, as an experience of how vulnerable you feel when someone steals your possessions. However they were only possessions and we were determined not to let it spoil our Christmas and we still had our visit to Aviemore to do.

So Sunday the 22nd saw Andy and I travelling to Aviemore through snow and sleet. He drove up, we delivered the parcels, had lunch and I drove down. Driving in snowy conditions doesn't give me too much of a headache. I was used to it when I first learned to drive. However this was not going to be my last experience of travelling in a white-out in 2013...

Christmas Day came and went and was a wonderful time shared with family in situ in Scotland and skyping other family members from all over the world.

Friday the 27th was the day for us to leave the UK climate and travel to Sicily via Gatwick. Sicily was an unkown country to us but one that has a lot of mystique including the fact that we were staying at Taormina and our hotel room had a balcony with a fabulous view of Etna, as seen below. 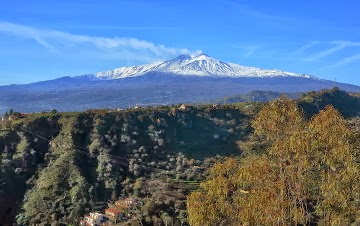 The rain lashed in Glasgow on the Friday and as we went to deliver my car to the long-stay car park we saw the flashing blue lights of the police behind us. We stopped and Andy was politely asked to leave the car and join the police in their car. We didn't have a clue what was wrong. However it seems that when I got my new personal registration, AP51 FLP, I had omitted to tell the insurers and the police obviously had nothing better to do that day than come after us.

Anxiety set in and we were now running late... Insurance information cleared, we set off, parked the car, arrived in haste at the airport to find that our plane was delayed! And 4 hours later we found out that they had found a fault on the plane and had grounded it. Another plane had to be found. Gatwick at 1 am is not a recommended time or place to be! 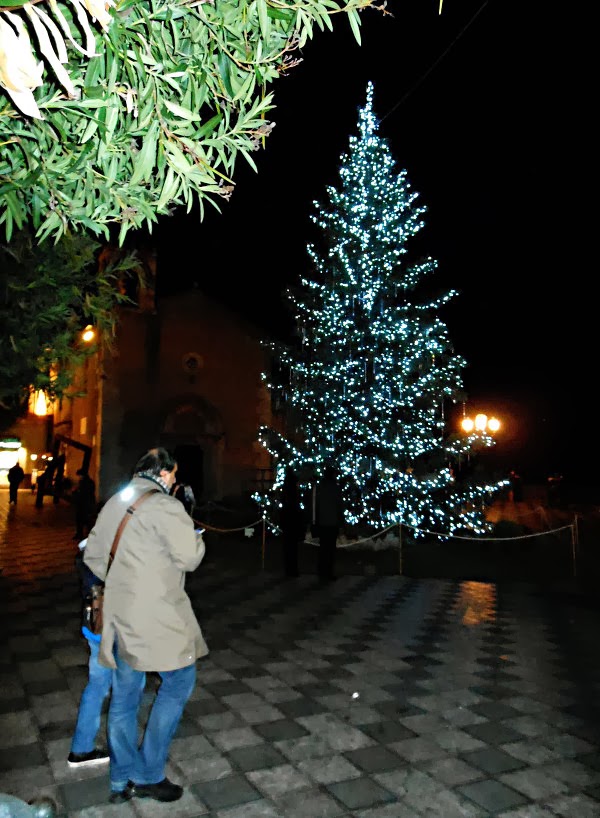 Now surely Saturday the 28th is going to be better? Well, Easyjet managed to have many delayed flights that day as the weather was still not conducive to flying, so we finally arrived at our destination at 5pm to be met by Angelo, our driver who was very well named.

He drove us safely to our hotel and assured us that we would have a wonderful time in Sicily and we did...
... and this is where the real adventures begin. "Le avventure!" We explored everywhere, went on a funivia, local bus, walked the amazing festive streets, even visited the famous Taormina Greek amphitheatre seen below with views of Taormina nestling under the volcano, Etna that has decided to wake up.

It sends plumes of smoke that resemble clouds. It rumbles, making the sound of thunder in the distance and spouts lava down through its' snowy covering. We are enchanted and decide to... 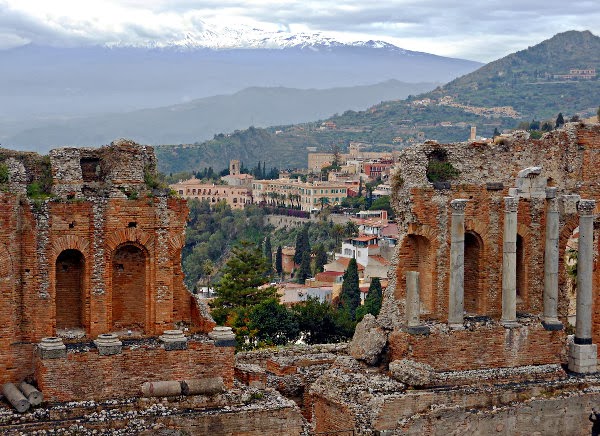 ... book a visit to Etna on New Year's Eve! The trip was to include wine tasting and visits to local tourist attractions ending up at Etna with a funivia trip to see the lava flow. What wasn't on the itinerary was a blizzard and the bus losing its purchase on the road and the driver and guide not managing to get the snow chains on! So we all stood outside in the snow and watched the various exploits of driver and guide trying and failing, to get the bus back safely on the road. Eventually we were towed by a snow plough to the funivia cafe with all the Italian rescue cars and helpers in attendance. It seemed like just another day to them!

All of the passengers had functions to go to that evening; however the adventure just seemed to be part of the festivities. Once safely back at the hotel, and a warm bath later, we were royally treated to a nine course gala dinner that just went on and on...


New Year's Day and the sun is shining and Etna's snow-covered peak is looking festive. We are happy to stay where we are and parade the streets with the multitude of Sicilians enjoying New Year's Day "passiagata" and filling the town with cries of "Tanti Auguri" to all they know. Angelo has told us that in the spring you can ski in the morning on Etna then visit the beach in the afternoon for a spot of bronzing! However perhaps that could be another time...

Thursday found us trying to get a bus up a mountain to visit another village.

Castelmola by name, sitting precariously on the top of the mountain behind Taormina... however no bus appeared! The hotel told us there would be a bus every hour and yet the bus stop sign said no bus at 10.45am... it was "pausa caffe" time we think.

However we did meet up with Maria, one of the other passengers on our fateful bus trip to Etna and so we shared a taxi drive with her to this famous local village.

As luck would have it our old camera had decided to shut down on us on the trip to Etna so I am hoping that Maria will be able to send me some photos of our eventful New Year's Eve.

Now the adventures aren't finished yet as our driver Angelo has been booked to take us around and about various non-touristy sights and a tourist visit to Savoca where The Godfather was filmed. 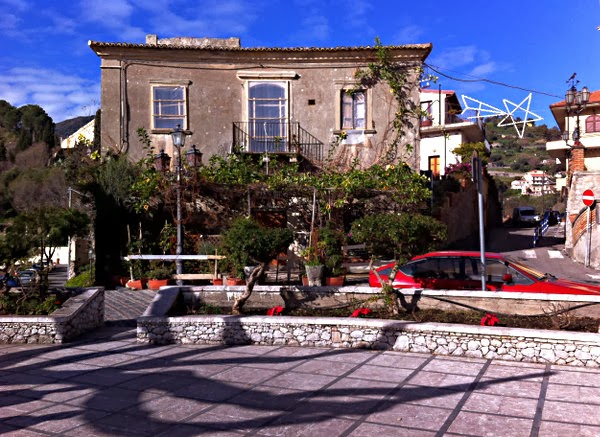 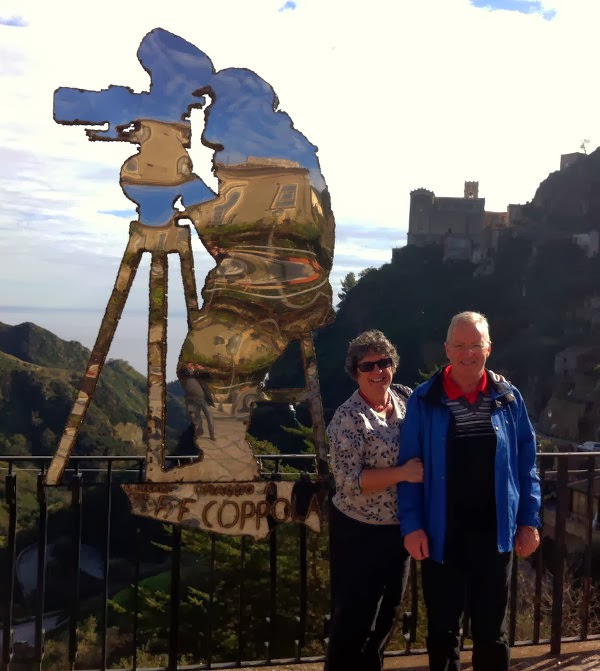 The house on the left was in the film and the photo below is a metal sculpture dedicated to Francis Copola. and then there is ... us, two tourists who stopped for coffee and the owner said to me in a broad Irish accent:  "Well you can just stop talking that Italian and tell me where you come from!" High in the Sicilian highlands we had found a wonderful Irish woman in the most idyllic spot imaginable.


... and on the non-touristy sightseeing Angelo took us to visit to his cousin, Angelo!

What a blissful place. A veritable paradise. Full of everything that a garden can offer including trees laden with pecan nuts!
There was a pig, a pony, chickens, goats and geese and every fruit tree imaginable.. even bananas... although bananas and mandarines weren't ripe yet ... the oranges were and we were given a big bag of oranges, and a generous bag of pecan nuts, a colossal grapefruit and a bottle of home made olive oil! 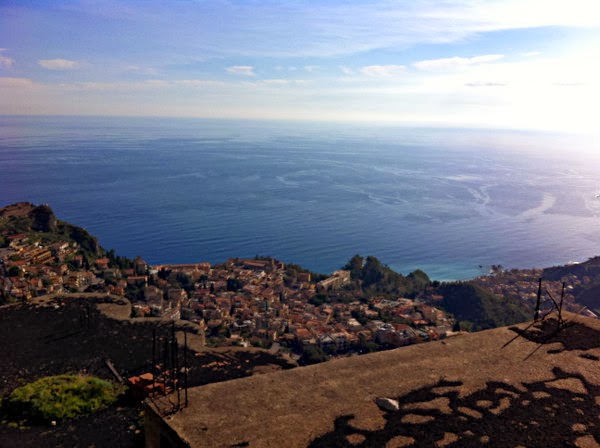 The holiday continued to enchant with fabulous views of the coastline and the countryside from every corner of this exquisite spot.  The spectacular town of Taormina and the land of Sicily itself has spread its charm and we feel welcomed in every way possible... until it's time for Angelo to takes us to our flight home on Saturday the 4th January, 2014. He wishes us well and hopes to see us in the summer, when he will arrange a BBQ at his cousin's house and a visit to Commissario Montelbano's police station... a presto Angelo! Grazie mille per tutto.
Posted by Eileen Auld at 09:57 No comments: