Do you recognise the famous road in the photo below? It is used in the background of many postcards and paintings and I am delighted to say I drove down that road and I am also delighted to report that recently I took the road less travelled ... by choice! 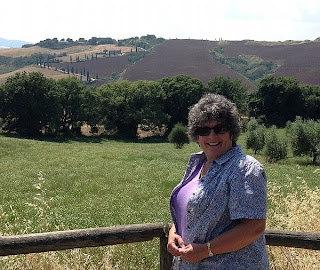 How many times do we take the road less travelled? *

Usually in my case, it is when I have taken a wrong turning. Both in the literal sense and the metaphorical. So when young Ken, the older son, and myself went exploring Italy... we experienced "a road less travelled" in every sense of the words! It started at the airport when I took, what was to me, a familiar turning. However as we were visiting a completely different area of Tuscany we were, you guessed it, on the wrong road! Now it took us a full hour to find this out as our directions still worked! How does this happen? No idea, but I think we make it so. We fit our lives around our beliefs. So when people believed the world was flat they never went further than a stone's throw and made sure that safety was their priority! I am sure there were a few adventurous types... you know the ones that discovered other worlds beyond the horizon and were disbelieved by those souls who stayed at home. Their stories were described as "Tall Tales"...

The following may well sound like a tall tale. It is a wonderful story of "happenstance". You know when something happens... because you happen upon... so here is an account of our happenings...

Kenneth and I went a cross-country route to find our hotel just outside Siena. As already mentioned, a very cross-country route. Not that we were cross, as we were discovering lots of different roads that I had previously been unaware of. When you stay on the main thoroughfare you miss so much of the countryside. It's the downside of getting where you want to go as quickly as you can! 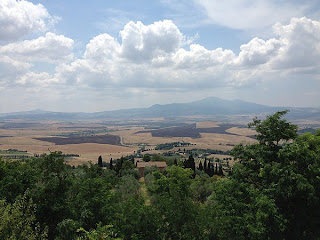 So Kenneth and I tootled across Tuscany as seen on the left and we eventually found our hotel which just happens to be a modern build. We responded by being a little disappointed as we were by this time very tired, and emotions change when you accept tiredness as the standard emotional approach to life. However we all know that happiness is not due to outside circumstances and I was by that time, just looking for a comfortable bed and a shower. We checked in and we got upgraded! Oh and by the way did I tell you we got an upgrade at the car hire? A Coupe would you believe! Now the emotion/connection to the hotel is changing... Kenneth and I have a lovely room each and I have a balcony overlooking the most gorgeous Tuscan scenery and a fabulous view of Siena. Kenneth meanwhile finds that we also have a pool, and a pool bar. Talk about counting your blessings...

We shower, swim, and get dressed for dinner. Now we are accepting the explorer's frame of mind,  being open to whatever comes along, and we find a wonderful restaurant, La Guida in Taverne d'Arbia, the next village to ours. It is probably true to say that nearly every restaurant in Tuscany is wonderful, but this is such a gift that we return on the second evening and even get a discount! But I am getting ahead of the story and I know that the tale is getting taller by the minute...

We were supposed to visit three venues in the Radda area of Tuscany, but due to Mr Ryanair changing flight times we had to forego seeing them. (Although I had been offered the chance of viewing them from their gates!) So while dining on our first evening, I decide that The Universe is telling me to go a different road. Yes again you guessed it, the road less travelled. Now it isn't just me The Universe talks to, The Universe talks to everyone. It is just that we are sometimes too busy or even too pigheaded to listen. I can assure you that there are many conversations going on. You can even eavesdrop on some of them. You know the ones... when you hear someone else telling you their dreams and you are inspired by their courage when you see where their dreams take them. 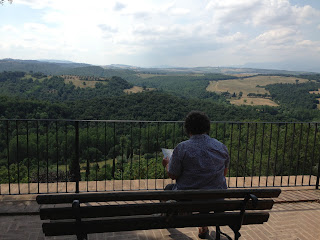 My own personal chat was that going south was a better option than going north, and as I had an internet acquaintance to meet, one of those inspiring dreamers I mentioned earlier, in a truly amazing town called Pienza and Kenneth had a vague contact in Castelmuzio, another town close to Pienza... the decision was made. We were going south to uncharted territory. We did have a map; however it was out of date by 10 years and roads can change in that time! Here is a photo of me resting in Castelmuzio, studying the map and checking exactly where I had been driving!

What a glorious adventure we had visiting Pienza and surrounding area. We visited John, my internet acquaintance, at La Bandita and La Bandita Townhouse  A wonderful venue and John's story is as wonderful as his house on the hill. It took us half a day to find our way there and 40 mins to get back to the hotel. We even managed to find another wonderful restaurant for lunch, and later on, we found a cafe that was showing the Andy Murray Wimbledon final. Blessed doesn't do justice to how we felt...

When we visited La Guido on the second evening we were treated royally and remember we even got a "sconti" (discount). Food and wine were superb and I picked up a flyer advertising a Villa Vacanze/holiday villa in a nearby village. Another decision to be made: "Should we chance a visit? Turn up unexpected?" We decided to visit it on our way to Siena in the morn. We know by now that it will be the road less travelled to Siena, however nothing ventured nothing gained. 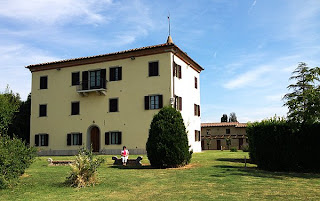 This is the villa. Villa Brignole by name, just on the outskirts of a village called Monteaperti and perfect for our 2014 yoga weeks. We were enthralled. We turned up out of the blue, were welcomed with open arms, and after some initial misunderstanding due to my imperfect Italian, Sabrina understands that we want to return with yoga students, their husbands, their families... in fact everyone we know. Can you sense my enthusiasm? 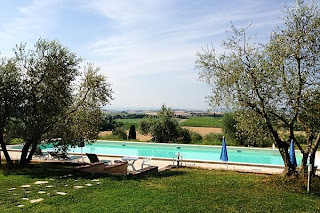 It was ticking all the boxes that my four years of taking yoga weeks in Italy had flagged up. En suite bathrooms; swimming pool (as in photo); garden space; easy distance from Siena; walking distance to local village (tavern); associated spa (which was the one we love at Rapolano Terme). Now how to make it happen...

All this is before our morning coffee which I have promised Kenneth. A very special experience of sipping an espresso in one of the cafes situated in Il Campo, the famous Siena square, as seen below. 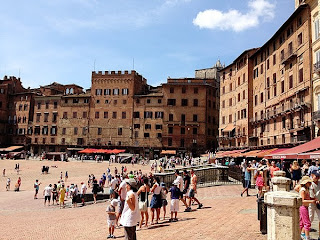 Our blessings are mounting and as Siena is my favourite Italian city, I am happy to share its delights with Kenneth who hasn't visited this ancient città before. After our caffè in Il Campo, we sightsee and then meander along the winding streets until we come to rest for lunch at a little cafe. The name of the cafe is Monteaperti (!) the very name of the village we visited that morning where Villa Brignole is situated. Is it a sign? You bet. Now I don't need any persuasion that this road less travelled is the one for us Living It yogis and yoginis. However it is a wonderful "coincidence" and one that I will treasure.

We were only away four days. Four days visiting a completely different world. I don't just mean Italy, I mean visiting a world where everything that happened was an "upgraded" experience. A delight to savour... a road less travelled.

*M. Scott Peck has written a philosophical book called "The Road Less Traveled". I recommend this book to anyone who wants to explore a different approach to spiritual growth. That title is drawn from Robert Frost's poem "The Road Not Taken" which is essential reading for anyone, whether they want to explore spiritual growth or not!
Life's a journey- enjoy!

p.s.... if you want information on next year's Living It Yoga weeks... contact me at eileen@well-connected.biz  I have already got bookings for both the spring and the autumn week! 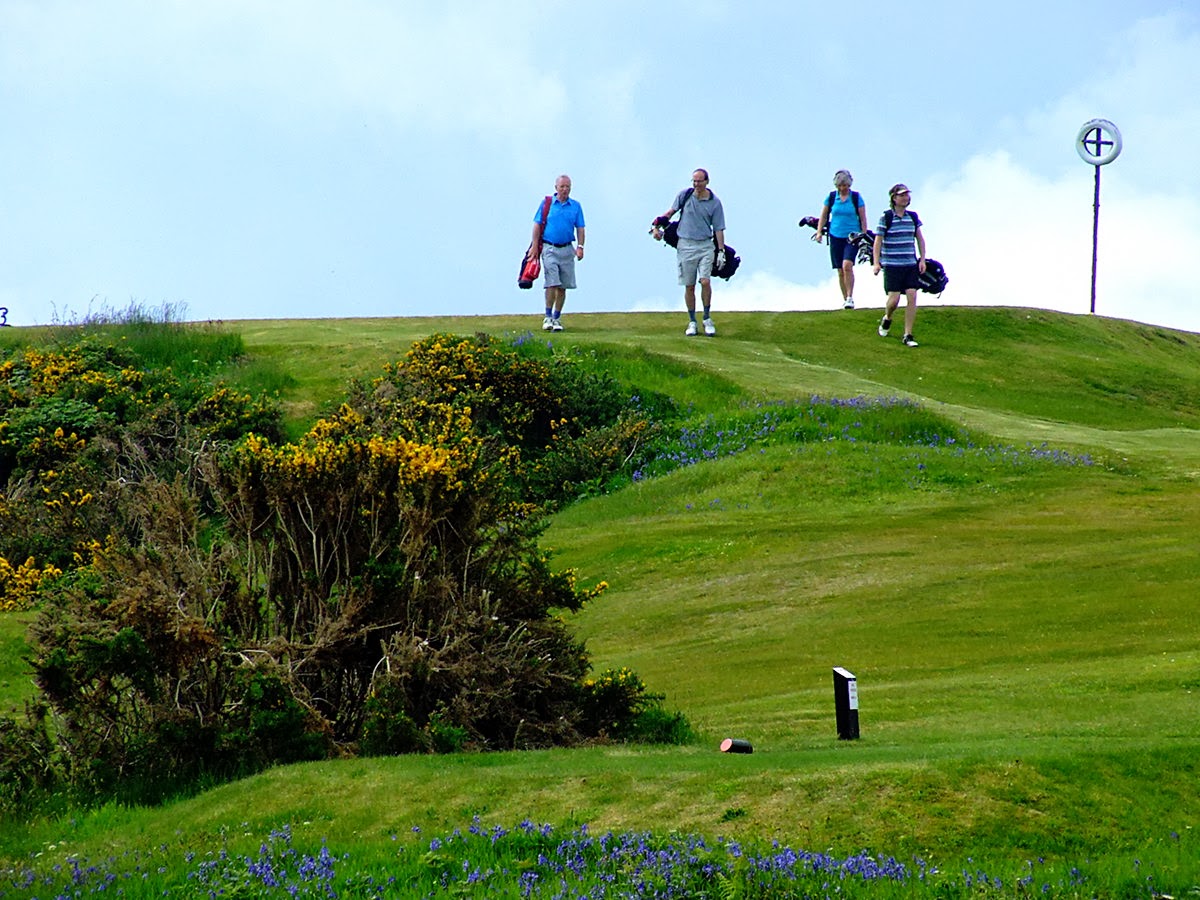 Well there have been some mega changes in my circumstances since I last wrote in this blog... and please feel free to add your tuppence worth in response. I would love to read about your responses... and no I am not part of the group on the left, boldly going... or to put it another way... playing golf. Although I was supposed to be...
So what happened? At the end of May I attended a friend's son's wedding and danced the night away. So far so good. At sometime during my jigging on the dance floor I exacerbated an underying condition in my left knee, resulting in hobbling around the next day in elbow crutches ... two days later progressing to using a walking stick and nearly a week later throwing the stick away. No biggy, you may say as we can all hurt ourselves and the body has amazing powers of recovery. I totally agree! However the week I was hobbling with a stick... was a family golfing holiday on Arran and the following week was a holiday with friends on Madeira. 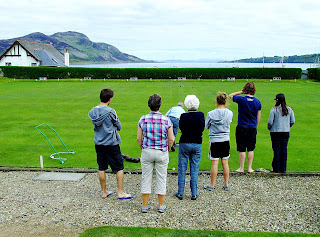 Those were the challenges, so now to the boldly going part. "Luckily" my husband had booked us into a spa resort on Arran, Auchrannie, and I "resorted" to chillin' while everyone else was very sporty - golf, tennis, walking in the hills and even... bowls! I on the other hand enjoyed the leisure and pleasure of massages and Turkish baths as well as applying hydrotherapy exercises.

... and while on Madeira I moved out of my comfort zone into discomfort as this island only has a few flat roads... everything else is built on the mountainside. I experienced two sides of the recovery coin... you know the rest side and the push yourself to your limits side. On the rest side I repeated the healing massages, Turkish bath treatment and hydrotherapy...

As my understanding of myself grew last month... my knee reflected my needs. I got a better understanding of when to stop and rest... and when to keep going. That was both physically and metaphorically speaking. So thank you Universe for giving me what I needed last month.

Now I am going to pick up the challenge of finding a place for our yoga weeks in Italy next year... yep that's right, Living It Yoga is going to keep going... after all it's Living It Yoga that keeps me going... I wonder what the Universe will have in store for me next week in Italy. A glass of chianti at least - medicinal use only!

To carry on the theme from last month's blog... congratulations go to Zoe Maclean who was presented to the Queen this month. Even the Queen is recognising Zoe's leadership qualities!