Just a quickie this month reflecting on the Scottish Women's football team and their experiences at the World Cup in France ...

What I saw when watching their matches was pride in abundance for their achievement in reaching this event. Their passion for the game of football obvious in every run, tackle, header and impressive kick.

Andy and I  were lucky to  have attended the match against Japan in Rennes as our niece, footballer extra-ordinaire, Fiona Brown was part of the squad. 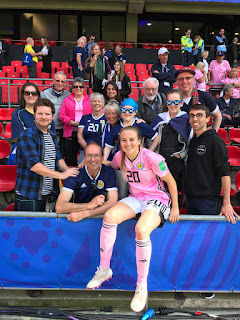 We, as in a large family group, had the privilege of watching Fiona playing for Scotland in the Women's Football World Cup in Rennes. Fiona's debut in this tournament was for the last 10 mins against Japan and boy did we cheer passionately when she ran onto the pitch. We were all so proud.

Scotland had played England in Nice and had lost 2:1 but were optimistic about their chances against Japan. However it was not to be ... another marginal defeat with 2:1 score ... and as for the match against Argentina - enough has been said about this already.

For me, the Scotland's team's passion for playing football is the main memory (usually named best bit)  I will keep from watching those three games!

Pride and Passion - what we Scots are famous for! I am looking forward to continuing to be part of Fiona's touring fan club at many future events.